Stay up to date with the latest Acutus news and information.

ACUTUS MEDICAL INC.’S ACQMAP MULTI-ELECTRODE ELECTROPHYSIOLOGY mapping catheter has the potential to fundamentally change how arrhythmias are understood and treated, according to Andrew Grace, University of Cambridge, one of the investigators of two studies demonstrating the potential of AcQ-Map to identify non-pulmonary vein targets for atrial fibrillation ablation.

AcQMap is a catheter-based non-contact cardiac imaging and mapping system.

It acquires up to 115,000 ultrasound data points per minute to rapidly create an anatomic reconstruction of a chamber of the heart and up to 150,000 biopotential samples per second to create a three-dimensional map of cardiac electrical activity of the whole chamber in real-time, according to Acutus. AcQMap earned a CE Mark in 2014 and FDA-clearance in 2017. The company launched it in the US in May 2018 shortly after FDA cleared the AcQRef introducer sheath to deliver the AcQMap mapping catheter. (Also see “US Approvals Analysis: Original PMA Slowdown, De Novo Upswing Among Recent Trends” - , 13 Nov, 2017.) 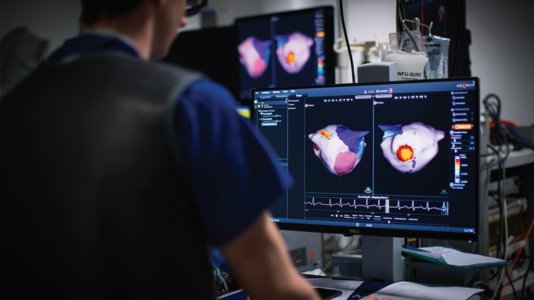 “The key thing here is the reevaluation of the fundamental basis of cardiac electricity and it goes back to the physics that underpin the generation of the electrocardiogram. That has, in my view, been somewhat misinterpreted if for up to 50 years,” Grace said.

Günter Scharf, a physicist at the University of Zurich “has exposed the fact that much of the physics that underpins theories of so called electric cardiology are incorrect,” Grace said.

“We’ve moved away from the current based model to a charge-based model and this will increase the capability of observing the true sources of the cardiac electrical field which has, obviously, immediate importance to atrial fibrillation and ultimately ventricular fibrillation,” he said.

Scharf’s insights into the charge-model are of “fundamental scientific interest in terms of relating the generation of the heart beat to what the electrical signals are that are recorded ... There are enormous implications that emerge from this.”

Grace, Scharf, and ten other researchers recently published results from DDRAMATIC-SVT, a study of a prototype algorithm for AcQMap, in The Journal of Clinical Investigation: Insight. The algorithm processes multiple non contact voltage measurements within the cardiac chamber to show a global distribution of charge-density sources across the endocardial surface. The study compared the results of the charge-density mapping to an established computer-simulated model of atrial conduction.

So far, technologies for non-contact mapping of arrhythmias have not been widely adopted outside of the UK, Grace said.

“It just didn’t have the capabilities to observe the true sources [of the arrhythmia] and had all kinds of issues with specificity.” By contrast, “the AcQMap tool is, obviously, an phenomenal feat of engineering,” he said. (Also see “AF Ablation Procedures Driving CRM Market Expansion” - Medtech Insight, 27 Mar, 2015.)

“Charge density allows one to exclude the distant confounding signals - the far field noise - that gets in the way of resolving the true sources of the electrical fields. That is the major scientific advance, and then, we showed that that you can get better resolved maps of atrial flutter and there is no controversy about the activation patterns in atrial flutter.”

In DDRAMATIC SVT, the charge-density-based global activation maps for hearts undergoing atrial fibrillation showed a reduction in farfield interference compared to existing mapping approaches. The study also showed that ablation of the targets identified by the charge-density-based maps led to slower arrhythmia cycle-lengths and termination of the arrythmia, which “indicates both mechanistic and pathophysiological relevance,” according to Grace et al.

DDRAMATIC SVT showed AcQMap can help find sources of atrial fibrillation beyond the pulmonary vein, “which is one of the golden objectives of current electrophysiology,” Grace said.

Contact mapping technologies cannot find these targets because the signal-directions are constantly changing, he explained.

The charge-density cardiac maps produced by Acutus’ AcQMap represent “the first true maps of atrial fibrillation,” according to Andrew Grace, University of Cambridge.

Grace was also one of the investigators of the 127-patient UNCOVER AF trial, led by Atul Verma of Southlake Regional Health Centre in Newmarket Ontario, evaluating the safety and effectiveness of AcQMap to find non-pulmonary-vein targets for ablation treatment of persistent atrial fibrillation. Results of UNCOVER AF were presented at the Boston AF Symposium in January and will be published in a journal soon, according to Grace.

At the AF Symposium, Verma said, “We have mapped arrhythmias with the same technology for decades without asking if there’s a better way to locate ablation targets and deliver a more precise, patient-specific therapy ... The results of the UNCOVER-AF trial demonstrate that with better imaging, we can perform patient-centric ablations with great success, while dramatically improving patient quality of life. This advanced cardiac imaging system paints a complete, high-definition picture in real time and is an important step in advancing the standard of care for AF ablation procedures.”

“I think [the AcQMap technology] is going to transform everything,”

Grace said the reduction in atrial fibrillation shown in UNCOVER AF represents “a 20% increment over results with other approaches.

“He uses it routinely in clinical practice and it has been adopted by six hospitals in the UK’s National Health Service because “they’re finding it beneficial.” But, he acknowledged, a randomized trial will be needed to “truly prove what we would contend anecdotally to be the case, that this is a superior technology.”

He also believes AcQMap can help researchers understand the genetic origins of these arrhythmias.

“We can now resolve the signals. It’s almost like an in vivo protein assay. We can then map it onto genomes and genetics, which are obviously fundamental in the generation of much of atrial fibrillation. So there’s all sorts of value that will come out of it,” he said. “I think it’s going to transform everything.”

From the editors of Clinica
Published online 29 March 2019

Our experienced team is committed to pioneering breakthrough technologies in the treatment of complex cardiac arrhythmias.

Stay up to date with all the latest Acutus news and information.

For more information about Acutus Medical, get in touch.